On Saturday 7th June a group of 13 K&E divers (Jackie and Brian Maskell, Paul Eyden, Len Hards, John O’Donoghue, Leanne Collinson, Gill Wilson, Kev Tulip, Jason Stark, Dave Price, Lucy Richards, Pete Whelpton and Jack Thompson), as well as 4 non-divers (Audrey and Jim Molyneux, Pauline and John King, and last but not least, Amber the dog) descended on the quiet town of Selsey for a shore dive under the Lifeboat pier, as part of K&E’s on-going shore-diving initiatives.  We experienced a variety of weather; upon arrival at 8.30am we were greeted with torrential rain, thunder and lightning (as forecasted), but by 10am the rain had thankfully stopped and we enjoyed glorious sunshine for the rest of the day.

The sea was calm but the diving was challenging with 0.5 metre visibility. Two buddy pairs still managed to locate the old lifeboat pier that is under the water to the East of the current structure, and most of us dived for 30-40mins seeing many shells, crabs and lots of pretty purple snake-lock anemones.  Jim and Audrey Molyneux acted shore cover, so a special thank you to them for getting up at 5.30am and coming down despite the rain; Jim was invaluable in assisting divers in and out of the water. Despite sea temperatures of a toasty 17 degrees, all wore drysuits for the dives, with the brave exception of Amber the dog.

On returning to shore the BBQ’s were lit up by Leanne and Jim and the sausages and burgers were cooked.  As it was Kev Tulip’s birthday, the lucky residents of Selsey were treated to an enthusiastic recital of Happy Birthday, and Ken was presented with two (TWO!) birthday cakes.

We ended the day with a tour of the Lifeboat station, a visit to the RNLI shop and, of course, the inevitable pint and debrief in the Lifeboat Inn. 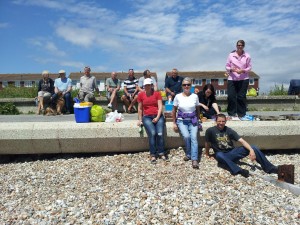 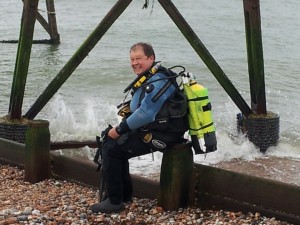 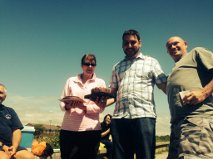