Last Sunday saw Seaking heading out on a clam hot summers day to the wreck of the City of Waterford. this fantastic upright and relatively intact wreck is home to huge shoals of fish, lobsters, crabs and the off conga. The bows are the most intact and can be safely entered where intact portholes can be inspected. Last time on the wreck I found a  slightly broken glass top to a oil lamp. I headed back this time to the same spot to have a rummage in the wooden crate I had found it in, carefully sifting the silt as broken glass was expected I was hopefully of finding more but that was not to be. However slightly further back in the wreck and near to the still intact toilet I spotted another crate and a glint of brass. The brass lamp base / wick holder of another lamp was revealed. Clearly there are a few of these on this wreck. A great dive was had by all. 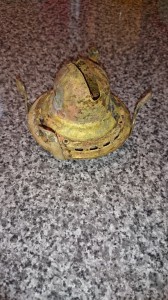