Having planned for Saturday and monitored the wind, a group decision was made to swap to the Sunday. Using our own boat we were able to change plans at the last minute without difficulty. The swap did however mean an early morning start. Was it worth it?

Well the sea state was certainly much better and after draining some water from the hull (boat cover appears not to have been on for a few weeks) we were on site 20 mins after leaving the harbour.

The shot line in and the vis looked good. Dave and Tom in first, decending the line things looked promising, and there was the wreck. Some say 8, some say 10. Either way the vists was great. A large shoal of bib around the stern and lobsters, crabs, scallops and loads of congas in the cement bag cargo made for an excellent dive. It was great to see the wreck in entirety and next time the dive brief will be quite different.

A reg problem for Mariusz saw him sit out the dive and Nick (first club Rib dive), Pete and Richard took second wave to the seabed at 31 metres for another great dive. Richard’s reel was an unfortunate casualty of the diving with Mariusz being accused of not clipping it on, shortly followed by responses about being responsible for your own kit (jovial banter at the expense of poor Richard).

Next Rib diving in 2 weeks time, sign up on the board now! 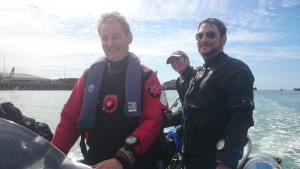