Pete and Rob go to Swanage

Yes, I’ve done some dives in the sea… but they were all in a place with 20m visibility and water temperatures only slightly cooler than my own bloodstream. The sea around the UK is somewhat different and Pete W. kindly offered to take me down to Swanage for a couple of straightforward dives to get some experience in the different environment of the British sea. After driving down with only one slight navigation error we broke our fast with bacon sandwiches in the cafe by Swanage Pier before kitting up and heading under the pier. This was a fun dive to just give me a chance to sort out my bouyancy and get used to being in the sea and we saw some nice sealife including a gnarly old lobster and a splendid tompot blenny with blue flashes on its anal fins. From his behaviour I’d guess it was an egg-guarding male. Nice. 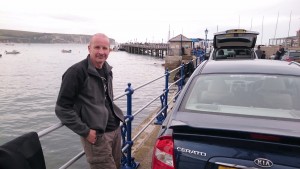 Next up was the main event of the day, the Swanage Valentine tanks. These are a real slice of history, being the remains of experimental amphibious “DD” (Duplex drive – referring to the powered propeller they had as well as the normal powered tracks) tanks which sank during an exercise in 1943. Similar tanks were used during D-Day a year later and also in other operations during the war. There are something like seven in total in the sea off Swanage but we were to visit two that are close together, one of which still has the turret in place. Gear onto the dive boat and off we headed, with some rather nice views of the interesting geology in the chalk cliffs.

The dive site is marked by a permanent shot line and we left the boat in buddy pairs, over to the buoy and quickly down into the grey sea. Pete and I were something like the fourth pair off and when we got to the first tank it was already a bit crowded and the bad vis – about 2m – was being made worse by the amount of silt being stirred up by our fellow divers. It was surprisingly dark despite only being at 15m and I started to understand why British divers seem to fetishise their torches so much. We’d already agreed that if the first tank were busy we’d head straight over to the other one and so we did, following a rope laid across the impressively shelly sea bottom. The distance between them is something like 60m so it took a little while to get there but it was definitely a good move. We had a nice poke round the surprisingly small tank and the really two man turret lying upside down on the seabed next to it. There was a conger eel lurking in the interior but we could only see its tail – it was maybe a little shy because whenever we went to a spot where we should have seen its head it turned round and showed off it’s back end instead. As more people arrived on the second tank we turned the dive and headed back to tank number one, pausing on the way to look at a big dogfish which was chilling near the rope and apparently completely unconcerned by our presence. Back to tank one and the vis was much better (although still grim) without a bunch of people kicking up muck and we could get an impression of the whole vehicle with a nice green glow from the surface outlining it.

Up the shotline and a safety stop at 6m was then followed by another at 4 and a half which my computer decided we needed for reasons known only to itself, then up to the surface for a cup of hot chocolate. All in all an excellent day out and a big thank you to Pete for sorting it all out and also for driving all the way there and back.