Seaking ready for the 2016 season

On Saturday 12th March, Dave Tresidder,  Gren Hamlyn, Alan Fox and myself met at the club on a beautiful fine sunny morning and loaded up Dave’s new pride and joy motor and headed off to Newhaven , via an ‘off piste’ route to drop some bits off at Crawley BSAC.

As is tradition, the day started with the mandatory bacon sarnie (egg for me) before getting down to work on Seaking, the trailer and the boat cover.  Six months of laying idle meant there was plenty to do, not least evicting the various small animals that has made their home under the slightly mildewed cover.

Seaking was given a thorough overhaul.  The electrics under the console were reorganised and rewired, the intermittent fault with the radio was traced to a badly corroded wire ( well done Alan).  A leak which dripped salty water over the electrics was identified and rectified, all nice and dry now.  Steering gear was greased and runs smoothly.  Every inch of the boat and cover (heroic effort from Gren) was checked, scrubbed clean and washed down – Seaking looks great now.  The earmuffs were connected to the engine and it started first turn of the key which was encouraging.

Knowing the engine and all the electrics, particularly the radio was OK, Seaking was launched for sea trials and also we could pay attention to the trailer. 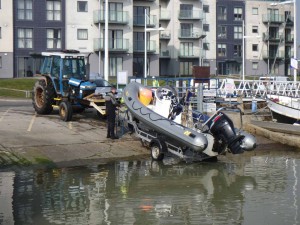 The general rule with a trailer is if it doesn’t move you paint it and if it does you grease it. Every bit of rust on the trailer and wheels was wire brushed and painted with Hammerite – looks like new now.

Any observer would have witnessed a scene of classic British workmanship, one doing, two watching, (un)helpfully pointing out the bits missed.  Makes you proud ! 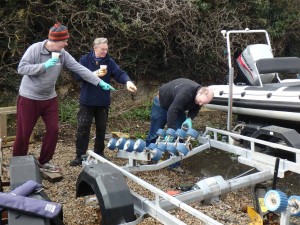 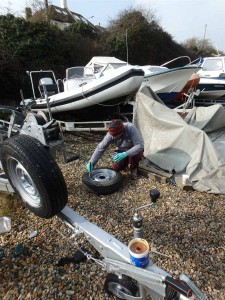 As it was a lovely day we decided to go a bit further afield and practice a bit of wreck finding under the tutelage of Obi-Wan (a.k.a Dave T)  so a quick nip out to the City Of Brisbane for the fun to begin.  Our only regret is we didn’t have our diving kit with us. 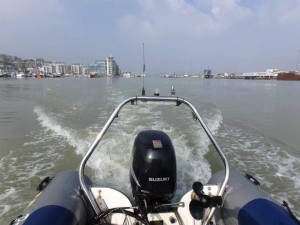 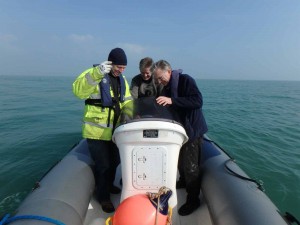 Seaking is running well and on the return journey to port the throttle was opened a bit and she showed she is capable of quite a lick when the conditions are right.   Safely, of course.

A hearty café lunch was enjoyed while the paint on the trailer dried off, Seaking recovered and washed down ( again) and tucked up ready for the her next journey out, which hopefully will not be too long.

Thanks to Dave, Gren and Alan for all their efforts. A great day out.   We’ve done our bit getting Seaking ready, over now to you, reader– let’s get out and use it.

If you want to take it out , see me.  I also have some useful checklists / procedures to help you plan your trip.