I remember vividly as a kid watching Blue Peter for updates on the progress in lifting a ship called the Mary Rose that had sunk in the Solent 500 years previously with Henry the VIII watching on and presumably rather annoyed.

I remember watching her come out of the water in her yellow metal cradle and thinking ‘wow, all that wood’…and that was about it…or at least all I could remember.

Fast forward 35 (ahem) something years and I found myself realising that I may have not been watching or understanding that there was more lifted than the wood.  I was only 4 going on 5 at the time, so I am pretty impressed I can remember that (nowadays with kids I am quite content if I can remember what happened last week), but here I am 39 years old only a few days before going on this trip and finding out that I still had a thing…or 20,000+ things… to learn from what was brought up back then.

The day, Saturday 10th February, started off with 40 club members and families descending upon Portsmouth Historical Dockyard for a 10:30 briefing with none other than Paul Griffith (Head of Operations) into the history and underwater archaeological dig.

Paul told us about Alexander McKee, Historian and Amateur Diver who rediscovered the Mary Rose and Margaret Rule The Archaeological Director who coordinated the under water dig, who didn’t swim well and couldn’t dive.  It was during this talk our Club President, Brian Deluce, chipped in that it was two of Kingston and Elmbridge Sub Aqua Club members who taught Margaret Rule how to dive so she could go down and see the site for herself. 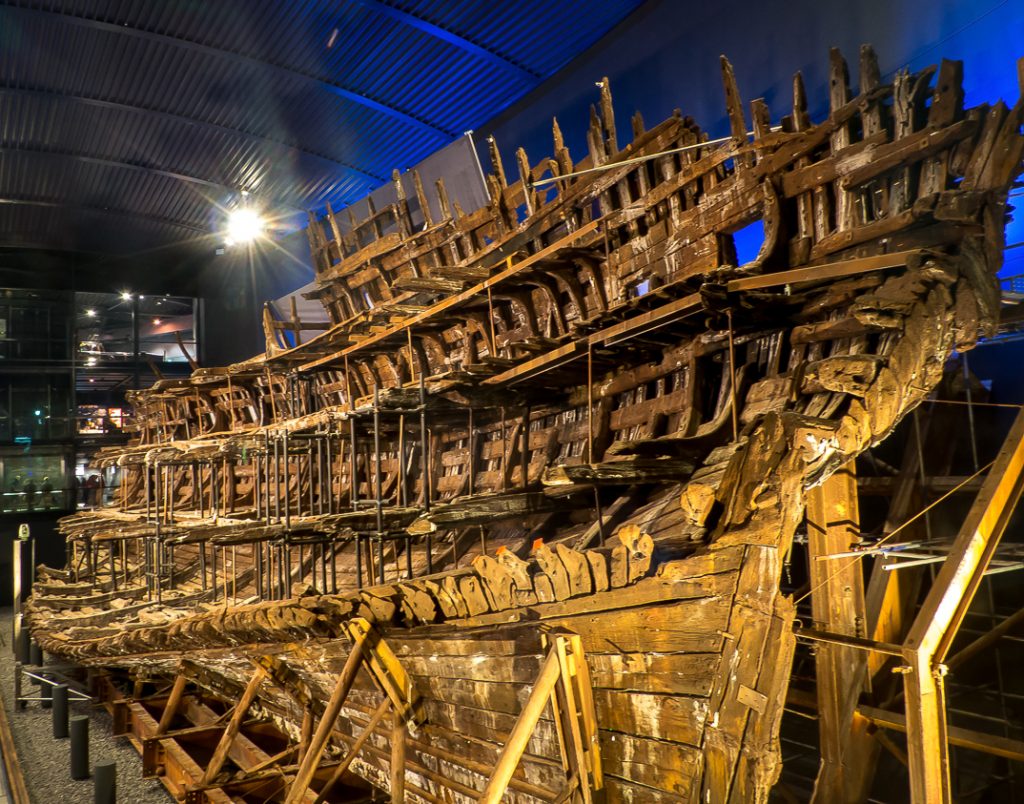 After our briefing and importantly teas and coffees were over Paul lead us out into the museum to look around on our own.

When I say museum, I mean wow…WHAT A MUSEUM!

The museum has over the last few years a £40m investment programme put into it, the majority coming from the National Lottery’s English Heritage Fund.  The new museum has quite literally been built in a shape of a ship around the Mary Rose, in dry dock number 3, where she had lain since being brought up 34 years ago.  This ship shape and interior floors mimic the opposite half and decks  of the Mary Rose that were left exposed above the Solent mud and had, over time, been eroded and washed away.

What I had failed to understand as a 4/5 year old was that when the ship went down, not only did it go down with 500 souls onboard (albeit 35 survived), for no apparent reason, but when it hit the bottom it laid on it’s side and 20,000 artifacts fell into the side that would eventually be preserved so well in Solent mud.

It was these 20,000 artifacts, we learnt, were first documented and brought to the surface by an army of volunteer divers, many of whom were BSAC divers who worked their paid jobs during the week and gave up their weekends to come down and help clear the mud and carefully bring up these artifacts.  What a project to be involved in! WOW 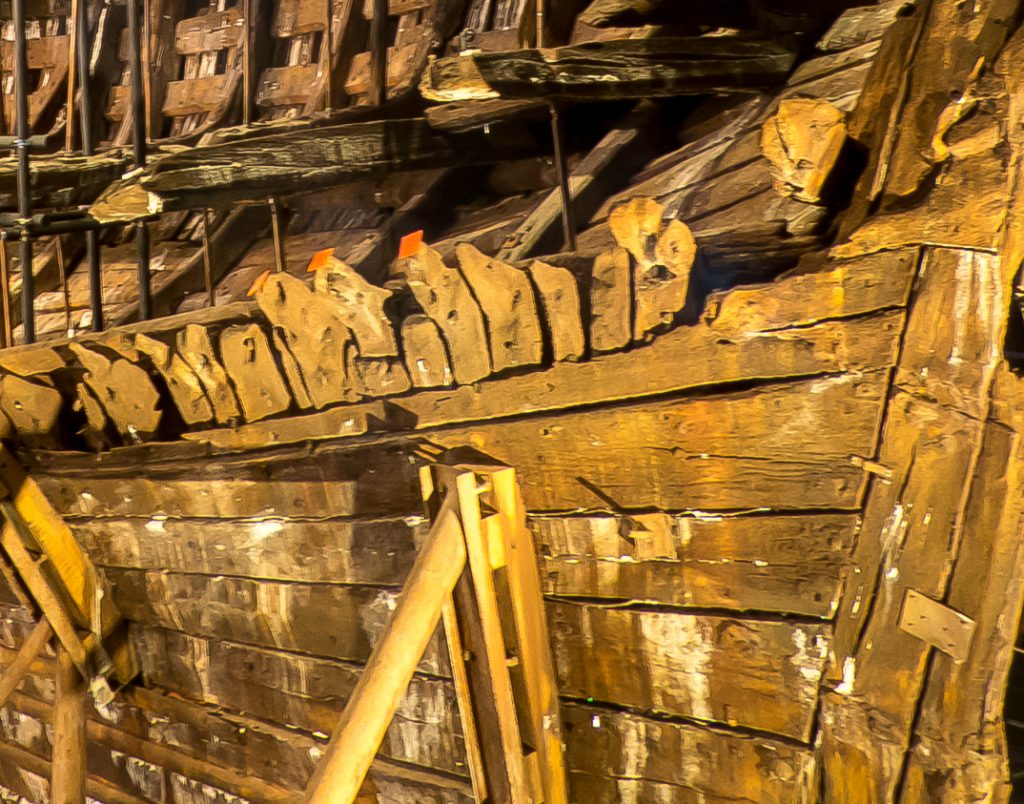 (The Three orange squares were the only bits of the Mary Rose that were showing out of the mud when Alexander McKee found her!)

Unfortunately Paul Griffith thinks that another project like the Mary Rose is unlikely to get off the ground today as insurances would require Professional Divers and Health and Safety that would hinder a project of this scale and cost too much. (If there were I am sure we the club members would all be there, making it possible!)

The remaining timbers of the Mary Rose were sprayed first with salt water for a number of years to stop the wood disintegrating and then with fresh water for 20 or years to get rid of the salt water, this was then changed to spraying with Polyethylene Glycol (PEG) which sinks into the wood and plasticises it to preserve it.  The spraying finally finished spraying in 2013 and has been slowly drying out in a humid ‘hotbox’ up until the new opening last May (2016) after the final phase of the museum’s transformation had taken place.  This transformation allows people to look over the ship without having to have a glass screen and fine mist in the way.  AND IT WAS MAGNIFICENT!

The lighting effects, the interactive display, the panoramic lifts between decks, glass bottomed floors, the display cases with all the artifacts, the video projection of people working, or in their cabins, right onto the wooden beams at the various deck levels were all GENIUS.  I don’t know about my 6 and 8 year old, but I was immersed fully into Tudor Times and learning about the skills and techniques used to bring up all this history some of which, like the Shawm – a musical instrument, only existed in paintings and writings, but one was found on board the Mary Rose! 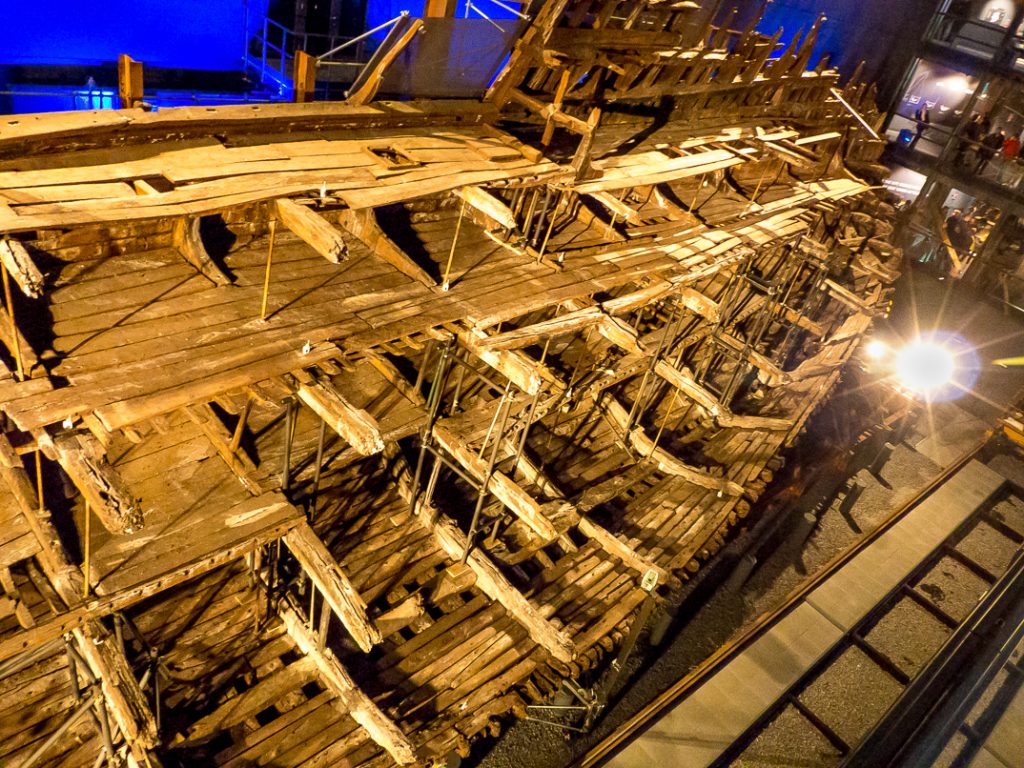 We were told in the future as the boat finishes drying and settles more original timbers will be placed back in their correct positions and some artefacts, such as ladders, ropes, tools etc… will be returned to the areas that they were found before they were brought up.

Would I go again, ABSOLUTELY and I am sure everyone in the club who went that day would say the same…there is just so much to see!

Thank you for Jacqui who organised it all!  Another cracking event Jacqui!