With Ian Angus leading last weekends club trip we didn’t do too bad in “Finding NEMO33”! 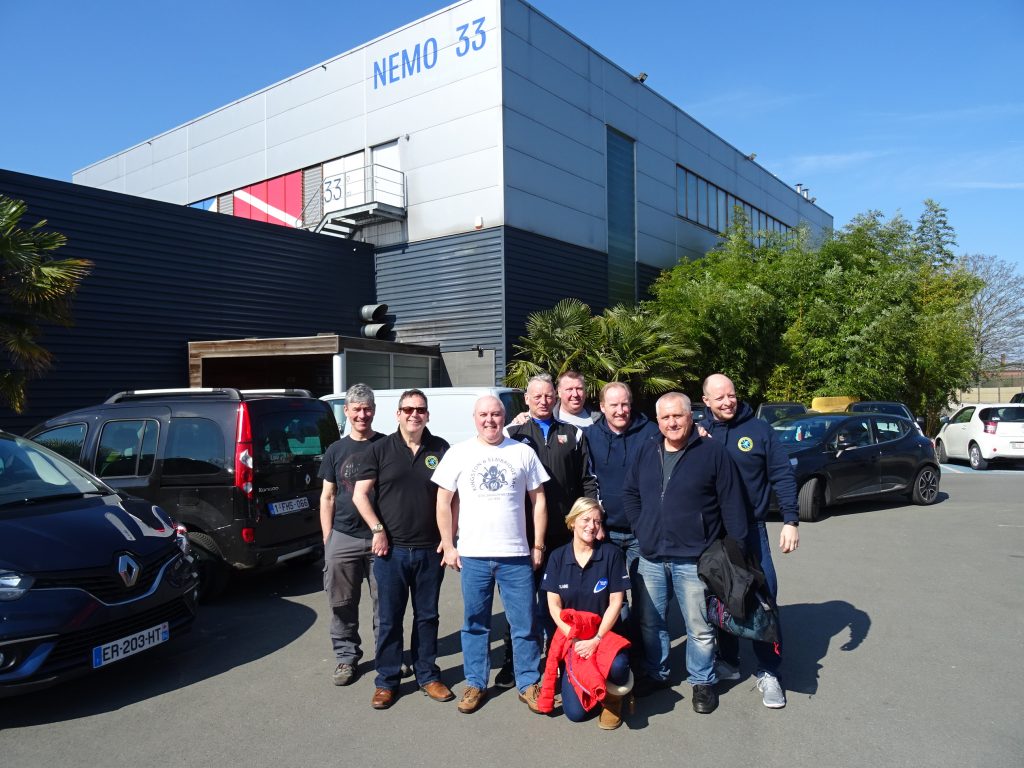 True it is a honking big silver building somewhere on the outskirts of Brussels, which helped!

Having said that Ian did a fantastic job in herding, or should that be shoaling, 9 club divers and 4 non divers safely via St Pancras on Eurostar and to our hotel in Central Brussels for the weekend.

Ian is someone who likes to ‘seize the day’ and had therefore booked us all on the 8:05am train from St Pancras on Friday 23rd March…which meant most of us being up by 5am to make it through check-in before the train departed.

Travelling by Eurostar was a first for me and I found it to be a very comfortable and relaxing way to travel across Europe….it seemed we were in Belgium within minutes, but that could have been because I fell asleep pretty much for all of the journey!

Thanks to Jonathan’s French and interjections of limited Spanish by Ian (‘por favor’) travel passes for the group were eventually secured and off we set to the Hotel Hyggee, chosen by Ian’s delightful wife Wendy.  And must I say what a lovely little hotel she chose for us.

The Hyggee Hotel, pronounced “hoo-ga”* on their website and by us as “Iggy” (as in “Iggy Pop”) is a boutique Scandinavian styled hotel. (*…would explain the exasperated looks given by the receptionists)  The hotel is quite minimalistic in design and filled with really expensive Ikea kind of objects.   (Hygee – A Danish conceptual word that means ‘Wholeness’)

We arrived at the hotel starving, so first things first, we dumped our bags and off we went to find a place to eat and drink.  We ended up in a yuppy bar that was recommended by the hotel receptionist, so we must have scrubbed up well?!?

The evening for some of us who could remember to put their clocks forward to European time was spent in News Café eating and drinking. 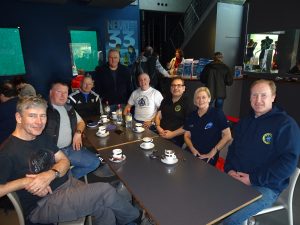 Next day we headed off by Tram with Ian in the lead to find NEMO33.

What a great place NEMO33 is!  Very well organised, fantastic dive shop, bar, restaurant and lots of activities utilising every square space of the building – catering for Free Diving, Aqua Aerobic Spinning Bikes, Scuba Diver training and of course what we came for….a relaxed dive in the 33m dive pool……33.5m on my computer…just putting it out there…b**ches! (pays to have the longest arms! ?)

The non chlorinated, thankfully, water temperature was a warm 33oC and crystal clear.

We had a group time slot to go in at 12pm once we had filled in all our paper work.  There was a quick briefing and a warm up swim before kitting up with tanks, regs and fins supplied by NEMO33.  The only things we had to bring were are own mask, computers and swimming trunks…the latter being very important…especially as there were windows facing into the restaurant/café for people to watch the divers.  Wouldn’t want anyone put off munching on their Mussels….a very Belgique dish I found out.

Talking of dishes I forgot that Belgium is the home of Waffles that come with all sort of fillings and toppings, glad I had taken some time off my training diet!  As we were in Brussels the weekend before Easter every shop front and chocolatier had some sort of chocolate egg and Easter celebration set up in their window. 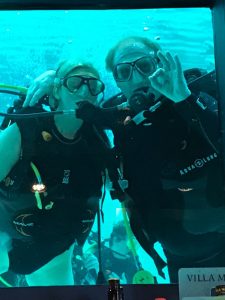 In NEMO33 you have little underwater ‘caves’ to explore that allow you to come up and enter into an air pocket where you can take off your mask and regs and have a chat with your buddy before continuing your dive.

Those who had been before warned me about the concentration of bubbles that would be coming up from the divers below in the main 33m shaft.  I was told it could be quite disconcerting as these little bubbles play around your mask, so I needed to be prepared to stick close to the sides of the wall and follow the tiles down if get disorientated.  As I was diving with Len my buddy for the day – our club Chairman, he kept us away while all the other groups and most of ours had gone down and were on their way back up.

We then made our descent to 33m slowly, I had a few problems clearing my ears around the 27m mark, but eventually made it down and promptly stuck my arm 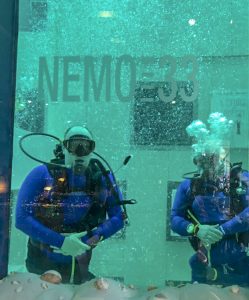 down as far as it could go past the suspended floor at 33m in the hole one of the ladders continued through.  Hence why 33.5m!  I don’t consider it cheating…as everyone else was doing it too!

Soon enough the strobe lights were flashing signalling that our dive time was coming to an end.  So Len and I returned slowly to the surface, did our 3minute safety stop at 5m and got out.

The rest of the afternoon was either shopping, in the pub or site seeing.  The Grand Place (A UNESCO World Heritage Site), Galaries Royales and the Manneken Pis (Pissing Boy Statue), along with the countless chocolate shops, cafes and waffle outlets meant that the afternoon soon sailed by. 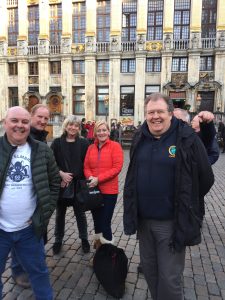 In the evening Ian had booked us an Italian Restaurant not far from the hotel called La Fringale.  However before that we ended up in the bar next door called the Mini Louise, owned and run by an English lady Kelly who has lived 20 years in Brussels.  The Italian was lovely food and involved a clown with a big tongue that took a real shine to Len (pictures provided) and kept making balloon flowers for the ladies.

After our meal we all ended back in Mini Louise, some of us until 4am in the morning, with Ludo the bar manager in the end offering to give us free drinks if we would just leave once we finished them.  For those who managed to make it to 4am it took them a lot longer to find their way back to the hotel (should have taken 15minutes…but I’ll let the guys tell you how long tomorrow night at the club house….put it this way, you may have made the shores of England on the Eurostar in the same time.

Those of us who could wake up, Jonathan basically, got up, had breakfast and managed to go and visit the Atomium statue.

The rest of us got up by midday, checked out and gingerly headed back to a bar we frequented on Saturday afternoon called The Brussels Grill, near the Grand Place to have a spot of lunch and nurse sore heads before returning to the UK on Eurostar.

Thanks Ian for organising such a fun trip that will be remembered (most of it ? ) for a long time to come!

Photos courtesy of Paul and Sarah, Jonathan and Nathan and Jo (I find it best to click on the first one to engage the lightbox and flick through that way quicker):