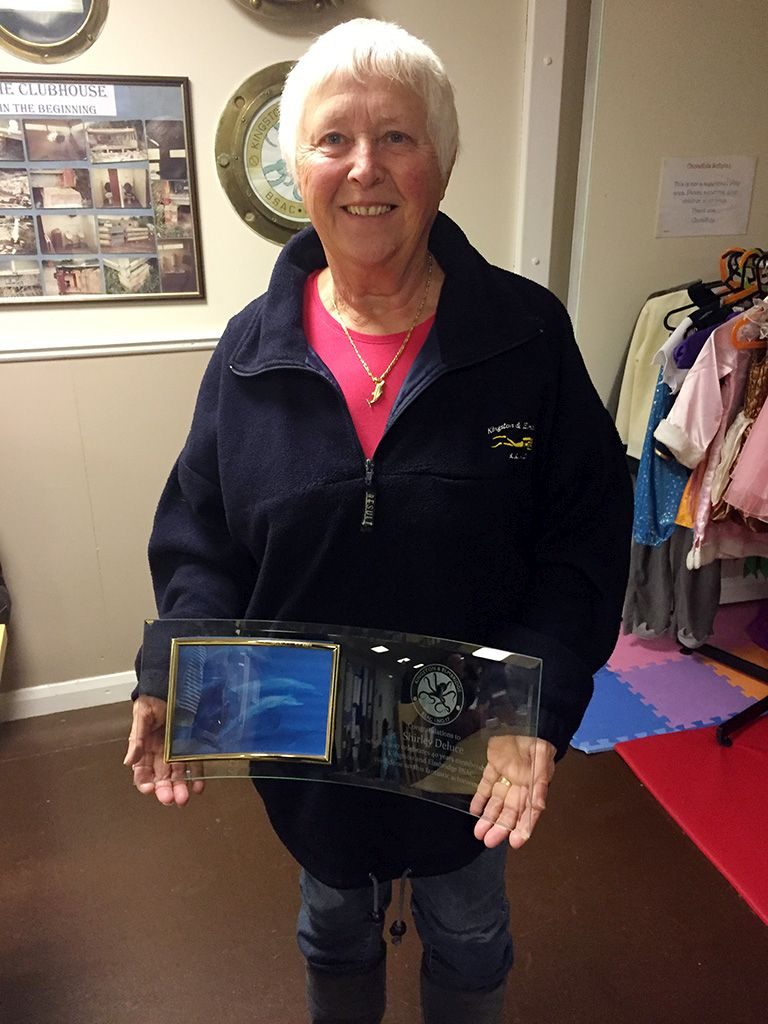 Shirley Deluce has just celebrated 40 years with BSAC’s Kingston and Elmbridge Sub Aqua Club (No.17).  In recognition of her time and commitment to the club Shirley was presented with a special trophy at the club’s Annual Dinner Dance.

Shirley is the club’s Welfare Officer, but has worn many different hats or should I say ‘dive hoods’ in those 40 years so I thought it would be a good idea to find out more by interviewing her for the club website.

Nathan: “Thanks Shirley for taking the time to talk to me.  I hope you don’t mind, but I have come prepared with some questions?”

Shirley: “No not at all?” “I’ve got my original dive logs here to help with dates.”

Nathan: “So when did you learn dive and why?”

“I met my husband Brian at a party.  He’s an ex submariner who I met at a party and one of the first things he said to me was “I do diving, and nothing gets in the way of my diving.”  As scuba diving was something I had thought of doing already, I joined Kingston BSAC where he was a member on the 19th November 1977.” 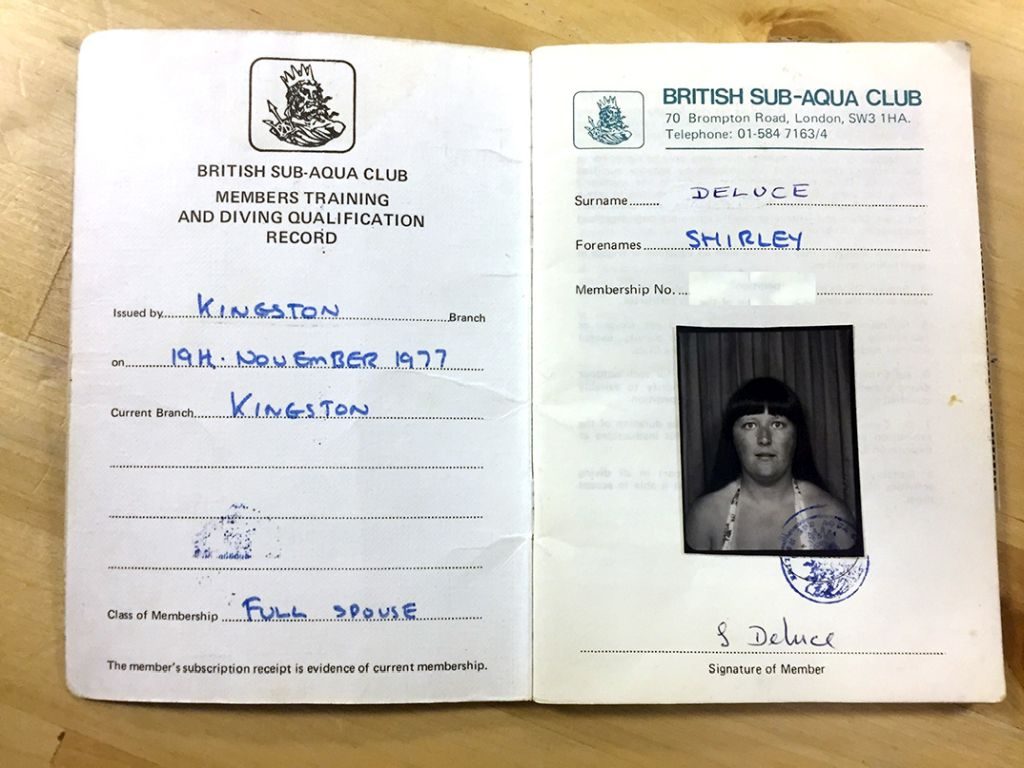 “Well, you didn’t start diving or be able to join the club until you could pass the swimming test, which I did on the 4th September 1977 and only then could you start to learn to snorkel.  The swimming test, known at the A Test was:

My 1st Open Water Dive was to be a 20ft (6m)  dive at Little Hampton, but before I could do that dive I had to show that I could snorkel and dive down 10ft (3m), which I did at Littleton Pit.” 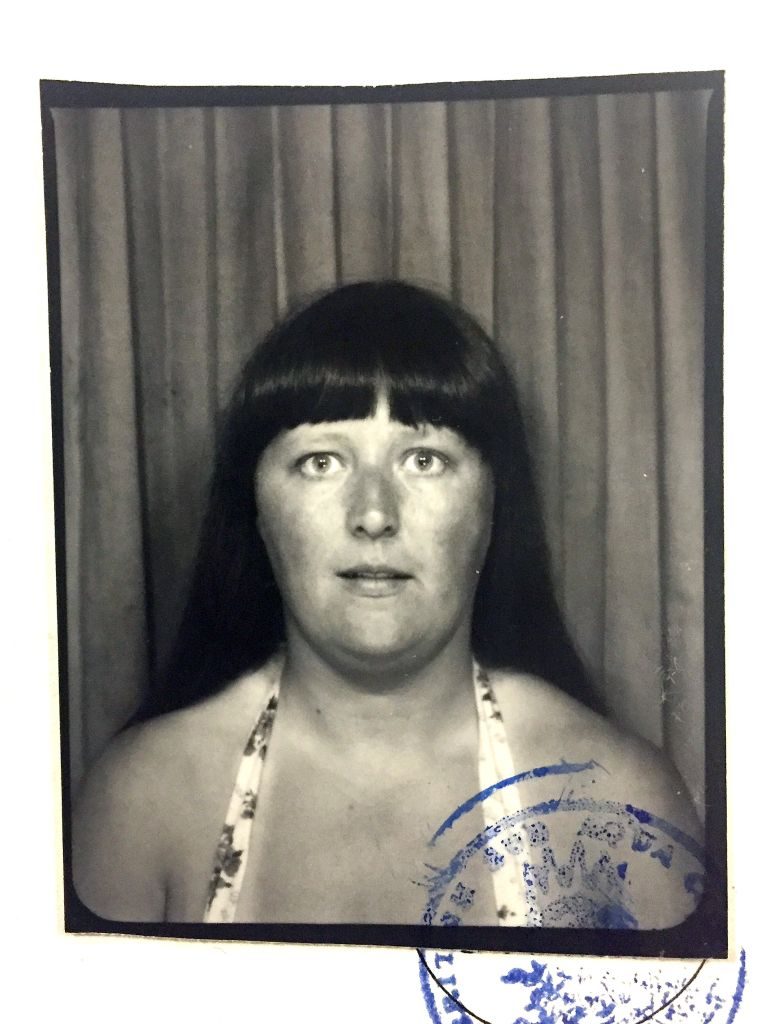 A Picture of Shirley when she first joined the club

Nathan:  “Who taught you to dive, Brian?”

“No it was a lady and good friend called Adele Morris, not many lady instructors back then and so was glad she was in the club with her husband, in fact there were only about 3 couples in the club back then with family about the same ages as our children so we could dive as couples while the other couples looked after our children or we ladies could go off together and then let the boys going out when we were back.”

Nathan: “So what kind of equipment were you using back then?”

“I have it written down here:

Nathan: “What’s the biggest changes in UK diving since you started?”

Nathan: “So how many dives have your done?”

Nathan: “Wow! So what’s your favourite bit of kit you like to take along diving with you?”

“I think my computer and a comfortable mask are the two things I like.” 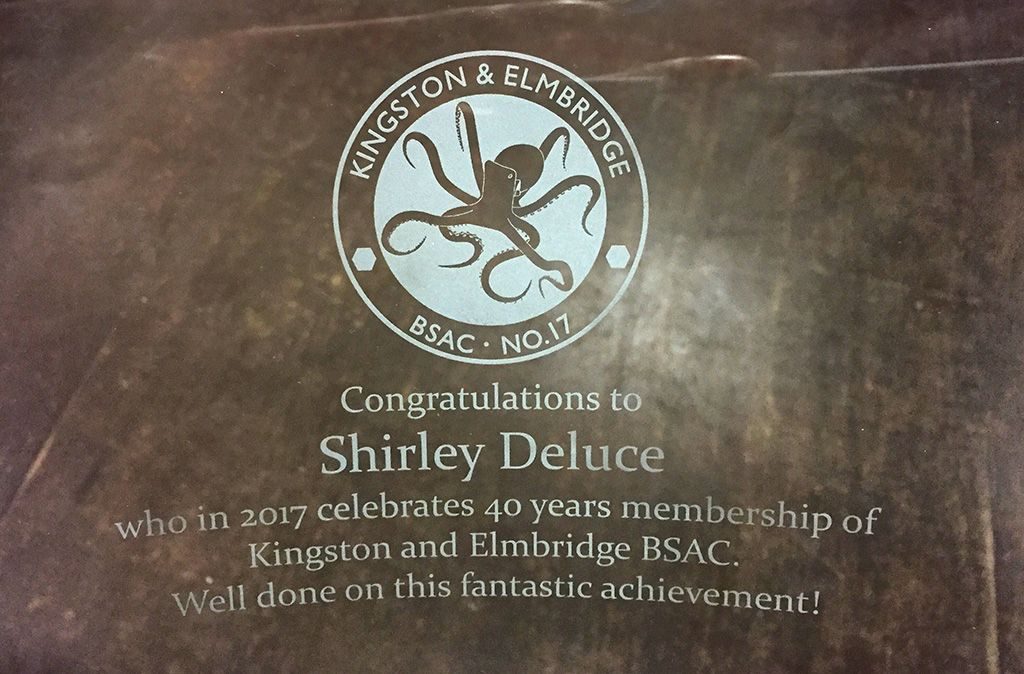 Inscription on the glass trophy

Nathan: “Tell us a bit about what you have been involved in with Kingston and Elmbridge club?”

“I’ve been on the committee a few times, worked behind the bar in our club house and in the  compressor shed.  I was also actively involved in the working party that took down an old workman prefab offices, used on the M25 construction, and re-erecting it into our current club house off Queen Mary’s Close, Tolworth.   (Next to St George’s Playing Fields – Corinthian Casuals)”

“We did a lot of fund raising to buy and transport it to site and put a lot of time into building the club house into the state it is in today, although we have done a lot of thermal insulation and decorative modifications since.  We are all very proud of that achievement and allows us to have a permanent facility for class room training, compressor shed, equipment and rib storage and Thursday night club night with the bar area and food.”

“I was also a Branch Instructor for a number of years until that position disappeared after which I  remained just as a Dive Leader.  I loved training, but now I really enjoy taking people for their first try dive and seeing their expressions.  Some people look so afraid at the beginning, but I like to help calm them down and take them through everything at their own pace and by the end of the try dive you can see happiness and a sense of achievement on their faces.”

“I also like to help people with disabilities to have a go at diving.   A clubs team and I have helped a lot of people to experience diving who may have felt that they wouldn’t ever get the chance.”

“I am currently the club ‘Welfare Officer’ and have been since that post was first introduced by BSAC. I was put forward and have been holding that role for some years now.  I really enjoy it.”

Nathan: “Tell me more about this Welfare Officer role?”

“It’s a committee appointed role that I have held for 10 year and I my responsibilities are to make sure everyone keeps happy, a keeper of the peace should I say.  I am also a confidant for members to go to and act as intermediary if needed between other members or the committee and the member.”

Nathan:  “What do you like about being a BSAC member.”

“As an umbrella organisation they have very good training and clubs that dive regularly. I feel I couldn’t or wouldn’t want to go anywhere else for my diving.”

Nathan: “How has the club changed over the years?”

“I would say that the club is much more inclusive, it wasn’t easy at the beginning for women, but it’s great now.”

Nathan:  “Going back on what you said earlier about helping people with disabilities to learn to dive, can you explain a bit more about that?”

“I have this connection and desire to help people ‘have a go’ and not feel they can’t do something, in this case – scuba diving.”

“I was trained in Scotland to be a National Instructor for people with disabilities under SCOTSAC.  After this training we developed what was called “The Dream Team”, this consisted of a few instructors and divers in the club who also wanted to give people with disabilities the opportunity to experience diving.  I am proud to say we have done and continue to try and help people to dive.”

“One of my favourite times was helping a group of children from a local Wimbledon school for the Visually Impaired train to dive at their school.  This then lead onto the school; asking us to get them ready for a trip to Jamaica so they could try diving out there and I was fortunate enough to be able to go with them and help 1 on 1 complete 8 shallow dives.  The following year this same group of children went on to do Tandem cycling across America!”

Nathan: “That sounds fantastic and can imagine the impact that experience had not only on their lives but all those involved.”

“Before we end this interview, tell me what kinds of diving do you like and where do you like to dive in the UK and abroad?”

“Any diving really, warm or cold.  I still love to dive in the UK.  It did take me a long time to build the confidence to dive inside wrecks and caves, but now enjoy it.”

“In the UK I love to dive out of Weymouth, there is a lot of variety of diving, whether that be wrecks or drift diving.  We have also made many good and long standing friendships down there that makes diving out of Weymouth that much more fun.”

“As for diving overseas I think that my best has got to be diving in the Maldives.  I saw everything they say you would, the Manta Rays and Whale Sharks.  Brilliant.” 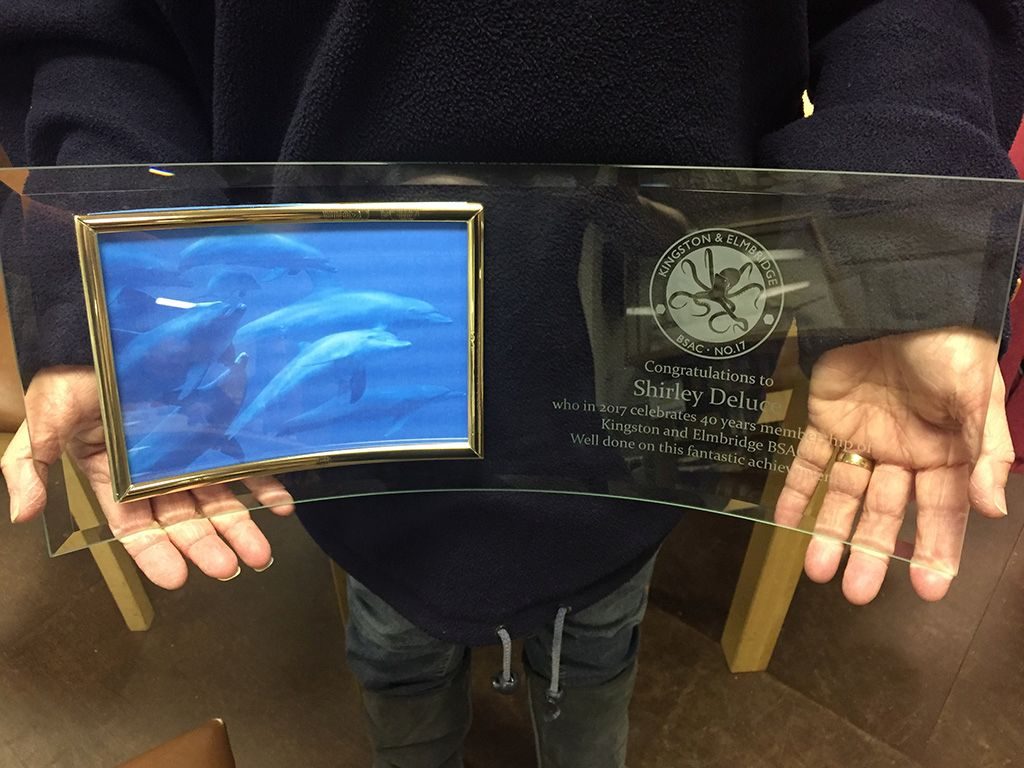