On the 31st August 11 brave members embarked in 2 Crew vans on the long 14.5 hour journey to Scapa Flow. Starting at 3am all I will say is that some people found it easier to get up than others !!!!!

We Eventually arrived on the 1st September being warmly welcomed by our crew of Hazel , Helen (Galley person), Lee ( Deck hand) and Nathan (Skipper). Hazel was working on their other boat Valkyhoree (new boat to their fleet that has ensuite showers). We then moved into our luxury accommodation, MV Valkyrie for the next 6 nights. Ian was happy as he  had a good result he drew the straw and had his own apartment for the week , however we were all very close to him so he didn’t escape the medley of snoring!!

We were very lucky with the weather it was calm and sunny until the Friday then it rained for Ian, Kev and Adrian’s awayday for sight seeing to Skara Brae (a stone-built  Neolithic settlement) and Kirkwall.

On our first night in the Ferry Inn we bumped into Simon Roderson, editor of the BSAC Scuba magazine as he is doing a feature re: 100th year of Scapa for next year. This isn’t the first time our holidays have clashed – hopefully we may get another mention in the magazine.

Other evenings we blended in with the locals in Flatties bar I can personally recommend the Orkney Gin and the men took a liking to the Scapa Special beer!! 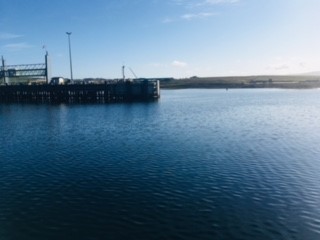 View from the boat 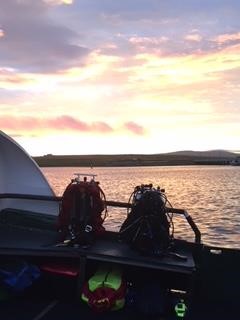 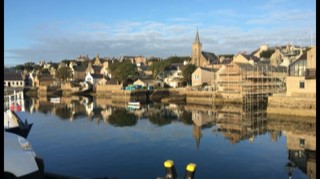 We dived the SMS Karlsruhe that was a light cruiser sunk in November 1914, from an accidental explosion. As you can see below it has changed quite a lot!!

For our second dive we chose the F2+ WC21 Barge that was a World War 11 German escort boat , it sank during a gale in 1946 and came to rest in Gutter Sound between the islands of Hoy and Farra.

SMS Dresden was a light cruiser that was commisioned in 1918 but never saw any action it was scuttled in 1919. The bow sits at 25 metre  and slopes to 38 metres at the stern. It is a very pretty wreck.

SMS Brummer, a mine laying cruiser carrying 400 mines. Despite being designed as a minelayer, the German Navy never operated her as such. She and her sister (The Bremse) were used to raid a British convoy to Norway in October 1917. Scuttled 21st June 1919. 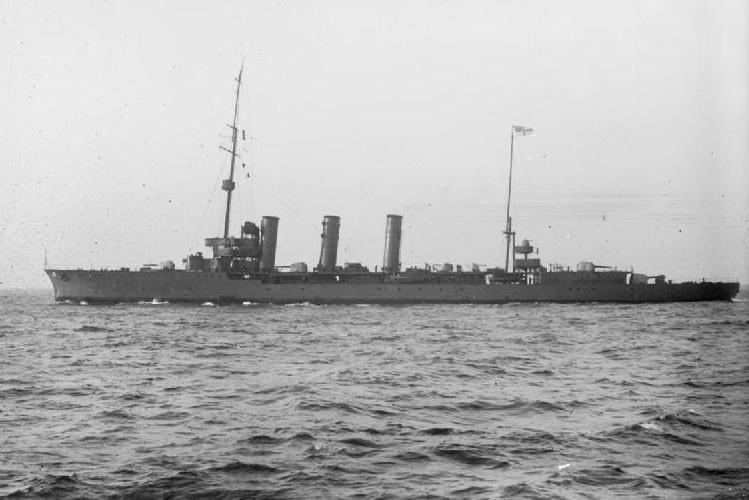 The SMS V83 was a motor torpedo boat destroyer built in Hamburg and launched in 1916.

She formed part of the VII Flotilla and was involved in night attacks on the English Channel.

During the scuttling of the German Fleet she was boarded by the British Navy and she was beached on the east side of Rysa Little, alongside the SMS G-92 which was later towed away to be scrapped.

The V-83 still lays in her original position and was not used in the salvage operations of the Hindenburg, although there was an unsuccessful attempt to raise her in 1926.

SMS Gobernador Bories : A block ship used for whaling sits in 12 metres of water and scuttled in Oct 1914. Being in the current the visibility was 10 metres. 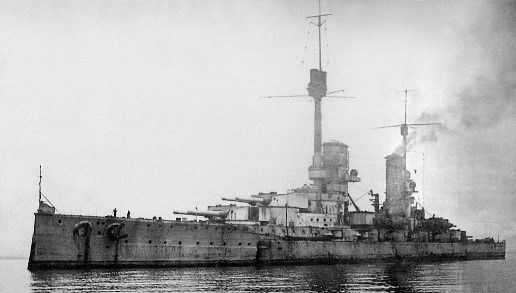 The Coln a cruiser of the German fleet its sister boat is the Dresden. A playful seal found us on the wreck.

UB 116 was a type UB 111 German costal torpedo attack submarine, it was the last naval vessel to be sunk during WW1in 1918. As you can see there isn’t much left . 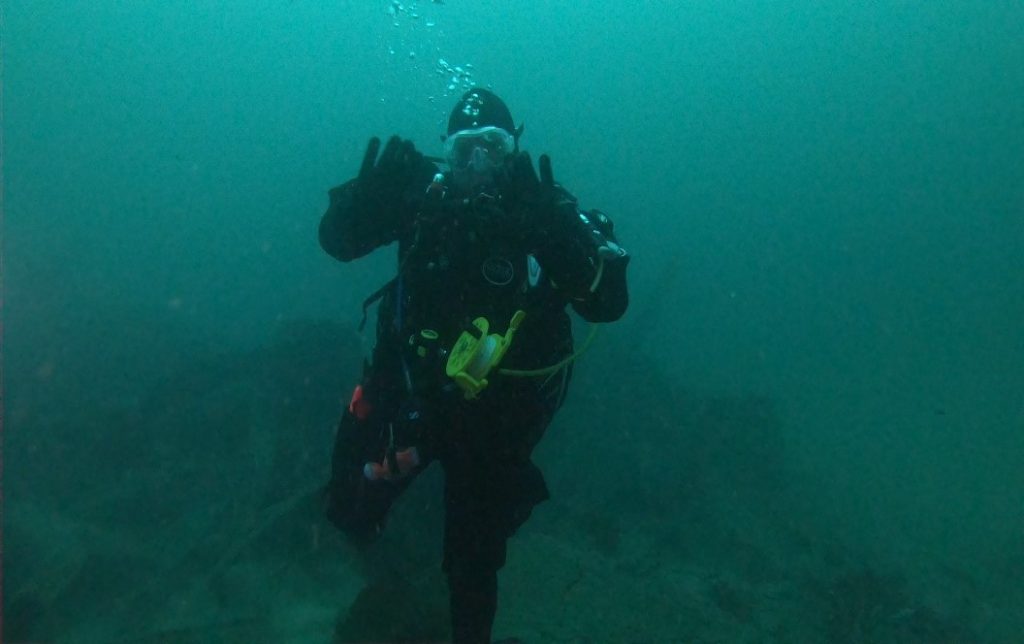 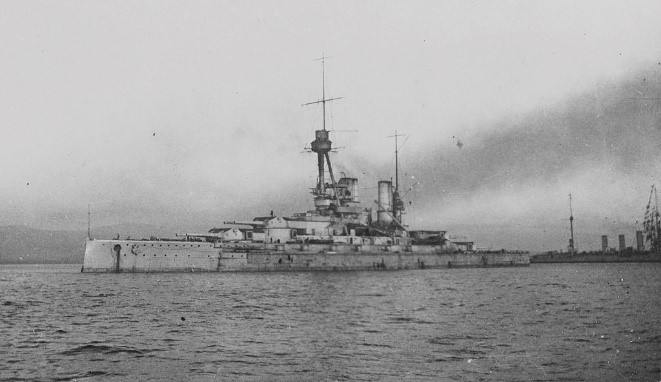 We visited Lyness museum but it is shut until 2020 for renovations so we visited the cemetery here are a few photos. 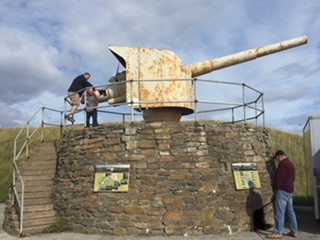 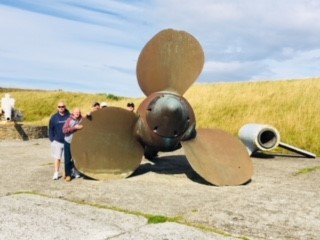 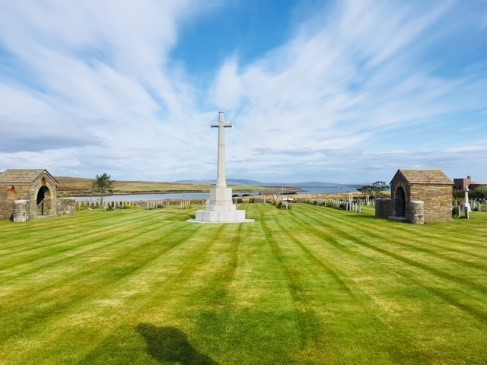 We didn’t have any major disasters under water but a few of us forgot that our tanks were tied up when kitting up !!! mentioning no names!!! On the journey home one of the Crew buses took a detour around Glasgow city centre !!

The food onboard was good and plentiful I am sure we all came home a little heavier.

The write up would not be complete without a mention of the neurotic dog onboard call Duggy!! Ian and Mark’s new friend apparently Ian was positioned where Duggy’s toilet was or was he just blaming the dog!!! Mark’s kit was where duggy would sit when no one was diving and duggy had a very long shaggy coat. 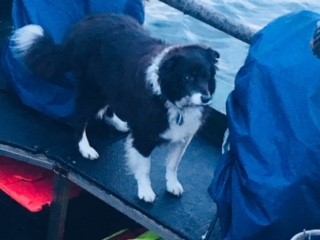 It was a great trip with lots of laughs, fab crew, company and diving thank you everyone for making it a very memorable trip!